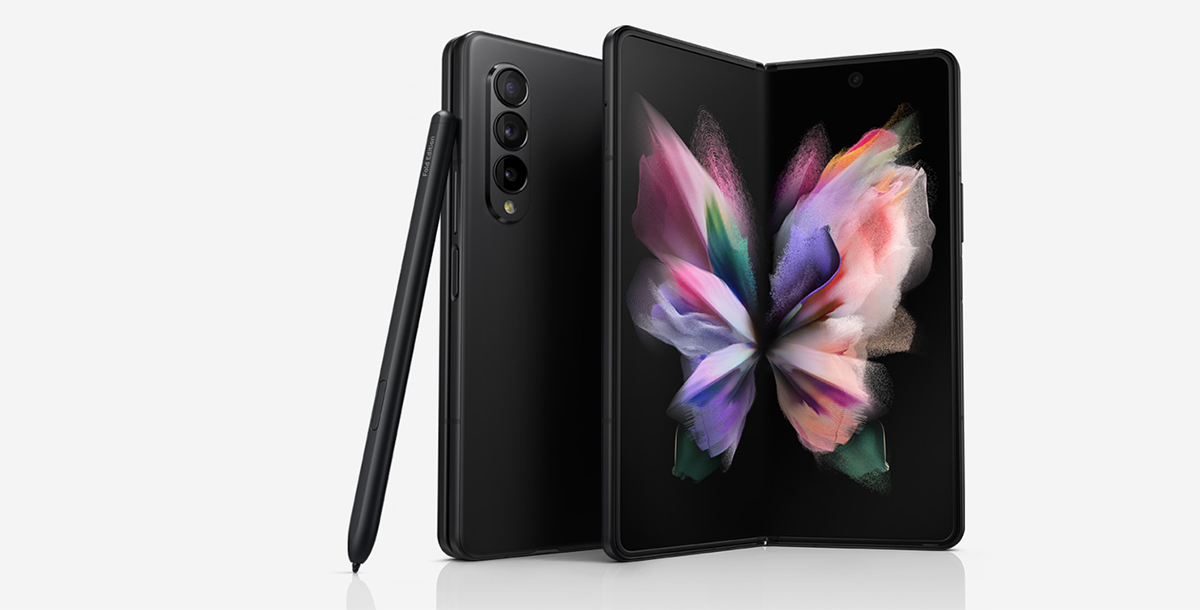 Stronger build and better protection
The Galaxy Z Fold 3 features an IPX8 rating, which means it is one of the first foldables to boast water resistance. But there is still no rating for dust protection. The smartphone's body is built with stronger Armor Aluminum and Corning Gorilla Glass Victus. The main screen is also protected with a stretchable PET film and optimized display panel layers, which, as Samsung promises, will guarantee 80% greater durability compared to previous models.

Improved displays
The Galaxy Z Fold 3 features two displays: a 7.6-inch QXG+ Dynamic AMOLED 2X Display and a 6.2-inch HD+ Dynamic AMOLED 2X Display. Both screens support a 120Hz adaptive refresh rate, which is an important step forward in the evolution of foldable smartphones. The previous model offered a cover screen with only a 60Hz refresh rate. It was a big drawback since there was a sharp contrast in UI animation smoothness when switching screens.

The brightness of both the main screen and the cover screen has been increased by 29% and 25%, respectively. Samsung's foldable displays have always been less bright than regular AMOLED displays. But due to the new Eco display technology, the company has managed to solve this problem. Users can now enjoy vivid colors with less power consumption.

Under-Display Camera
The main screen features a much-talked-of 4MP Under-Display Camera. The camera is still noticeable, but Samsung has managed to make it as invisible as possible. UDC seems less distracting than a cutout or a notch, so the display indeed feels more immersive.

S Pen support
Since there are no new Galaxy Note phones on the horizon, why not provide the Galaxy Z Fold 3 with the S Pen support? This decision seems reasonable and natural because the S Pen is a perfect match for the book-like form factor of the foldable. The Galaxy Z Fold 3 is the first foldable device to support the S Pen. It is important to note that only the main screen supports pen input, so you can't use the S Pen on the cover screen.

Two-Page Mode and Flex Mode for Samsung Notes
The company has decided to update Samsung Notes app, adapting it to the book-like form factor of the Galaxy Z Fold 3. Samsung has added a new Two-Page feature that allows users to view and edit notes on one part of the screen while the other part can display a selected template, such as a calendar or travel log. The app can now be accessed.

Improved Multi-Active Window
Samsung has significantly improved the Multi-Active Window function in cooperation with the Framework R&D Group. This feature allows users to run several applications on one screen at the same time. Now we can enjoy smoother transitions when rotating apps and better app adaptation to size and aspect ratio changes.

What's more, while browsing the web, you no longer have to leave one web page to open another. The new Drag & Split feature allows users to view web pages simultaneously on a split-screen.

More PC-like experience
Besides the Drag & Split feature, Samsung offers a few more improvements that bring the foldable phone closer to a PC-like experience. The Galaxy Z Fold 3 features a taskbar that contains app shortcuts with notification badges. And it's very similar to the Windows 10 taskbar.

As a result of the collaboration between Samsung and Microsoft, the Office apps now also support Two-Page mode. Moreover, the Galaxy Z Fold 3 can run two different Office files of the same type in Two-Page mode, which allows users to work with two documents simultaneously.

Live app widgets
Live app widgets are a great new feature that allows users to use floating widgets of different apps while using other apps. This feature is different from the Multi-Active Window feature because a widget is just a small part of an application that stays on top of any other application and allows users to use some of its functions while using the launched app.

Galaxy Z Fold 3 is an impressive device. It is the first foldable to feature water resistance and S Pen support. It's better protected, has a stronger build, offers a more PC-like experience, and features almost invisible UDC. The Galaxy Z Fold 3 is truly the best foldable device so far, and all the improvements we've just listed confirm this.